TwentyFeet on the Next Level

When we were discussing in a strategy session on how to take TwentyFeet to the next level, we agreed, that we wanted to broaden the utility of TwentyFeet above and beyond social media.

At first it was called "Ten Feet for Everyone". We wanted to keep all the magic of our scientific methods, but add a complete new set of use cases. A mobile app for daily activities about numbers would it be.

We called it "Quengel App" because we wanted it not only to help people to count all sorts of things, but also remind you of populating your data. Something, that bugs you consistently on the right spot, could be called a "Quengel App" in Germany (quengeln = to grouch, to whinge).

So we were aiming at a mobile app. Which platform? iOS? Android? Something else? We simply have iPhones spread around the company, so this platform would be much better for internal testing and feedback. And additionally Stefan from Spielhaus is a former employee, who develops iPhone apps with his partner trung.

Seeing the Reality in Digits

A counting app on the iPhone. Who would want that? What are the use cases?

We started with a brainstorming and found out pretty quickly, that we all were trying to monitor a couple of things in our lives. The biggest problem for most of us was, that we weren't disciplined enough, to keep track of all this stuff consistently. We simply forgot about our excel spreadsheets or wiki pages too often and too quickly.

So this venture is a bit of an adventure as none of us really had the discipline to keep monitoring the items consistently. We all know, that having such numbers would be awesome. It would help us to see the reality in digits. Very little biases and almost no unknown abstraction layer.

Wouldn't it be cool to have a chart of your electricity consumption? I soon learned that more of our corporate clients that I thought, actually maintained excel spreadsheets to get that.

I wouldn't imagine how many told me: "That's an awesome idea. I am a numbers person. I love counting and look at things in digits."

So the app that we created helps you to keep track of things, that you would count. It does that pretty handsomely in my opinion. But it does not do much more. It's a counting app. And actually it doesn't help you count either.

Initially we wanted to start off without charts. But the first user tests revealed, that you can't offer a satisfying app without eye candy. So we added basic charts.

And I believe, that there is lots to do in the analysis area still. But for now I would want you to perceive this as a simple "counting" app. You'll see, that there is huge value in a lot of items, that you can add. 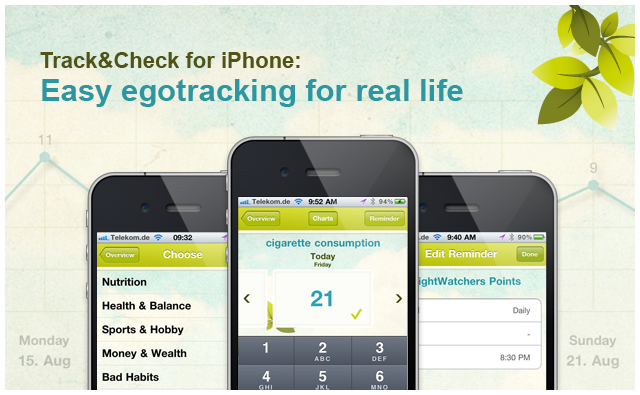 Expect us to add multiple cool stuff in the graphics and analysis area, if this approach is successful.

I am desperately hoping for feedback of all of you. Get the Quengel App for free in Apple's App Store. Please try it and tell me, what you think. 🙂